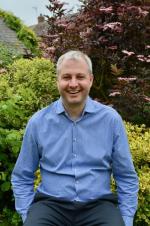 Jonathan and his family moved to Frisby on the Wreake from Coalville in June 2016 – they live on Water Lane.

After leaving full time education, Jonathan worked for Leicestershire County Council, where he studied accountancy. He then moved into the family business, Stirling Solutions Limited - an IT Software Company, specialising in providing computerised solutions to the Logistics industry – where today he is the Sales Director. In reality, he is practically running the business himself.

When not working, you will find him supporting his beloved Leicester City football club. Having been supporting Leicester City since the early 1980's, it is fair to say that he is by no means a glory supporter! In his heart he will of course forever live in the 2015 / 2016 season.

When time allows, he also enjoys attending the theatre and music concerts, and occasionally gets an opportunity to play eighteen holes at Longcliffe Golf Club. He and his wife Trena are popular and regular attendees and supporters of the many social functions in and around the village - the Village Hall (for which he is a representative of the Village Hall Committee), Wine Appreciation Society, Frisby Players and Frisby Live, to name just a few. Jonathan is quite the socialite!

Jonathan's view is that now is the time for people to work together, to share their experience and knowledge of all that has gone before, and to provide guidance and support, to help shape the future for Frisby on the Wreake. He is very much looking forward to working closely with his fellow Councillors, and all residents within the village, to support Frisby on the Wreake and to ensure it continues to thrive as the beautiful and friendly village that it is.

Jonathan lives with his wife Trena, and their children, Thomas and Emily. They have lived in Leicestershire all of their lives, and are proud to call Frisby on the Wreake their home. Leanne moved into Frisby with her family 13 years ago and lives on Water Lane, having previously lived in Bromsgrove, Leicester and Cossington.

After doing her degree in French and German at Swansea University 25 years ago, she trained as a languages teacher. Since then, she has worked in several schools in Worcestershire and Leicestershire, and after some time in various local primary schools, she still very much enjoys teaching French and German at a secondary school in Rutland where she hopes to continue to inspire future generations to love languages.

Leanne has been a Governor at Frisby CE Primary School for around 11 years, and is currently Vice-Chair of Governors. She has been involved in several Ofsted inspections and the appointment of numerous staff over the years. In the summer, she can be found leading the annual holiday club at St Mary's church, Melton Mowbray, which mainly involves lots of songs, silly actions and embarrassing her teenaged children! She also plays the flute and enjoys cooking and gardening.

Leanne has added her voice to the objections for various planning applications over the past few years in order to support those who want to maintain Frisby's unique character. Her view is that the Parish Council is needed not only to deal with the less controversial issues in a village, but also to monitor on-going developments to ensure that the village is enhanced rather than disfigured for future generations. She would like to be part of a Parish Council which works with residents, responding to their ideas and concerns to shape Frisby, and to protect the village from threats such as further unwanted over-development being imposed upon the community.

Leanne looks forward to working alongside like-minded individuals to this end with the support of the people who live in Frisby and the guidance of those whose expertise and experience are indispensable.

She lives with husband Gareth, and children Adam and Zoë 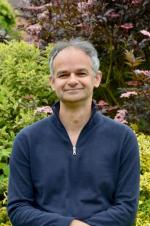 Alex has lived in the village for the past 12 years, at Garden Cottage on Well Field Lane.

He is a Chartered Civil Engineer and Contaminated Land Consultant, and is the co-owner of Nicholls Colton Group in Leicester – a specialist civil engineering business. He has been with Nicholls Colton for over 30 years, starting out as a junior engineer, and eventually becoming the Chairman.

In his other life, Alex is a highly regarded and very exciting drummer. Some of you will have seen him performing at Frisby Live. He plays in numerous bands, covering every genre from rock to jazz. He plays for internationally acclaimed Genesis Tribute 'iGenesis'; he has a significant presence on YouTube (2 million views of his drum videos); he is sponsored by his drum kit manufacturer, and last year he was voted in a readers poll as one of the world's top 10 'edrummers' (he plays a very advanced electronic kit). Once or twice a year he goes on tour in Germany, playing with musicians from UK, France and Germany. He is currently recording for an American artist.

Alex was actively involved in objecting to the various large developments proposed in our village, using his professional expertise to assist villagers where he could. On behalf of residents, he spoke at the Water Lane Planning Committee Meeting, since the issues there were very much a part of his expertise. He also got involved in the Cook's land objections.

Alex lives with his wife Jackie and daughter Robyn, who is presently at 6th form. His son Daniel is at Lancaster University. They have three cats and two guinea pigs.

Jackie was a member of NPAC and one of the principal authors of our Neighbourhood Plan. She is now the Tree Warden for Frisby.

If you've not seen Alex at Frisby Live, you may have seen him in his lycra riding his ludicrously expensive racing bike. He's a keen cyclist and he used to race – and still has the shaved legs to prove it! Kate moved to Frisby with her husband and two children almost 32 years ago.

For 18 years she worked as a District Nursing Sister based in Melton, covering patients in Melton and the surrounding villages. She then took the opportunity to work in the Primary Care Trust, first for 3 years managing the Nursing element of the community and hospital services in Melton, then as Head of Adult Safeguarding across Leicestershire County. Kate retired in 2012, having completed 42 years' service in the NHS.

Having been a Frisby Parish Councillor for the last 4 years, the last 2 years as Chairperson, Kate stood for election again to work with a new Parish Council to ensure the remaining two major developments, and any other planning applications which come forward in the village, remain in compliance with the Frisby Neighbourhood Plan.

Kate brings to this new Parish Council extensive knowledge of the village gained over her three decades of living in the village. She also brings her experience of the planning applications that are currently going through the system, and which could have significant implications for the Neighbourhood Plan.

Kate takes the firm view that the environment we live in is important to us all, and as such we need to protect public footpaths and our community infrastructure to ensure Frisby remains a village community that people would wish to live in.

Kate's aim during this second term is twofold: firstly to improve communication within the village, enabling all residents to have their say about issues affecting them and their environment; and secondly to ensure the Parish Council fulfils its statutory responsibilities.

Kate lives with husband George and enjoys time spent with her Children and Grandchildren. She is also a keen swimmer. 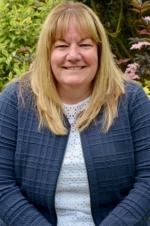 Sharon has lived in the village for four years, at Carrfields House, Church Lane.

She is a Shoe Maker, and has worked in the Shoe Business for over 35 years. She started out at the British United Shoe Machinery Company, and then moved to Thailand and later China to work for Lacoste. Sharon's current company, L&E International, is an American Engineering/Packaging business based in New York – she has worked for L&E for 11 years. In the course of her work, Sharon travels extensively around the world, including the US, Asia and Europe.

Sharon's real passion is for Football – in particular girls / ladies football. She is the driving force and Chair of the local Asfordby Amateurs Ladies, Girls and Inclusive Football Club. She set up the Ladies section in 1999, and her husband, Jim set up the Inclusive section a few years later. Sharon and Jim helped set up the girl's section together, and they now have over 200 players. She is always on the prowl looking for more female football talent!

As a Councillor, Sharon hopes to improve village life and to help make Frisby an even better place to live. As a Master Advanced Motorist she hopes to use this knowledge to help improve the safety in the village.

Sharon lives with Husband Jim and their two Cockerpoo's, who seem to know more people in the village than they do. Her daughter and son in law live in Pocklington, near York, and they have two grandchildren.

Your other Local Elected Representatives